My mom always liked to say that after Dada my second word was Dog. I asked for a dog every birthday and every Christmas for my entire childhood and never got one. Circumstances of life kept me from getting a dog for years and years until 12 years ago. Casey came into my life and gave me unconditional love, greeting me at the door every time I walked in like I was the entire reason for his existence and it didn’t matter if I was gone for a day or an hour the greeting was always the same. I’d sit on the sofa and he’d run up my body and lick and lick and lick until I thought I’d never have to wash my face again. During my darkest days, when I thought my world was ending or I was literally losing my mind, Casey was there to snuggle up against me, to put a cold nose to mine, to make me laugh! Today I lost the dog I waited my entire life for and I honestly, at this moment, don’t know how to have my life without him. Casey had the heart of a lion even if he only weighed 9 pounds. It’s only been 5 hours and the house is so cold already. Thank you Casey for romps in the snow, for puppy nose kisses at 5am and for tummy rubbers. For sunny days at the beach chasing seagulls and sand crabs. I will love you forever! 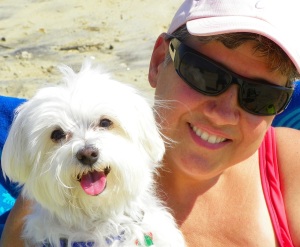 I look back at that post, now exactly 4 months later and it still makes me cry. I still have Casey’s pictures going by on my screen saver; I wait for him to attack me as I walk in my door;  I still reach for him next to me when I wake up in the middle of the night.  I’m not sure I’ll ever stop.  But there is a new pup in our home now and I’m still trying to accept that.

Casey came into our home to be my daughter’s dog but somehow, that didn’t happen.  Somehow he and I just made an instant connection and he most assuredly became my dog.  When he died, I was devastated and absolutely positive I’d never get another dog.  But I also knew my daughter would want a puppy almost immediately, feeling it was the best way to move on.  After a few days I knew that while I wasn’t ready, I would be eventually.  After a week, the house was just too quiet, too empty.  But what I wanted I couldn’t have…I wanted Casey back.

Over the next week or so my daughter kept sending me emails with pictures of puppies up for adoption from a local rescue.  She knew I refused to buy another puppy from a pet store.  I had done that with Casey when I didn’t know any better.  We were lucky and Casey was always very healthy but I didn’t want to ever do that again. So, off she went trolling the online pet adoption sites.  Every picture she sent me was adorable.  How could they not be?  Puppies are like that!  But I just kept saying no, that I wasn’t ready.  Give me time, I’ll get there eventually.  Then one night, while watching TV my husband handed me his laptop and said to me “what about this one??” “What about what one?” I asked.  Then I saw the picture of a little black and white puppy literally smiling at me from the screen.  “Wait..YOU’RE looking at puppies too?????”

You see, that really surprised me.  I knew my daughter would want a puppy right away.  I finally came to realize that I would too, eventually.  But I thought she and I would have to go to work on my husband.  That he’d be hard to convince since he didn’t really ever want a dog in the first place.  But, Casey’s death had hit him hard.  Harder than anyone expected, especially himself.  The quiet, lonely house was obviously getting to him too. Well, now I had them both to deal with and still I was not sure I was ready.  It had been less than a month.  It made me sad to think about, it made me feel disloyal.  I just didn’t know but I went along with it.  I guess part of me needed to feel something other than sadness.  I needed to feel excited about something.  I needed to close my eyes and see something other than Casey’s little face.  I needed to do something other than cry.

So I found myself filling out an online application to the rescue organization to see if we could even qualify for a puppy.  That was on a Thursday afternoon.  Without going through all the back and forth details of the following days, I’ll just say they found us to be a perfect home for a puppy and less than one week later, the following Wednesday, we were picking up our new puppy from his temporary foster home.

So, here it is…..exactly 4 months since Casey left me and 3½  months since Buster, our new addition came into our home.  I would love to say that Buster has filled the void in my heart but that hasn’t happened.  Don’t get me wrong, Buster is a great dog. He’s big and goofy and makes me laugh.  He can be a monumental pain in the ass, breaking things, digging holes in the yard, chewing on anything he can get into his mouth, basically being the ultimate puppy.  I laugh, I yell, I get angry, I get jumped on, I get sleepy hugs.  It’s been an adventure.  Some days I explode that it’s their fault I am stuck with this menace in my house. Other days I fall asleep with Buster sprawled over me and I feel warm and safe.  Some days I just wish he’d never come here. Some days I can’t imagine him being anywhere else.  But I don’t cry anymore when I see Casey’s pictures flash by on my screen.

But Buster has not filled the hole in my heart.  I really thought he would, really hoped that he would.  I never lost a dog before, didn’t know how to feel, what to expect other than grief.  The hole is still there and I don’t think it will ever be filled by Buster or any other dog.  But you know what, I think that’s ok.  Like any first love, it will always be special.  That piece of my heart that belongs to Casey went with him when he left me.  I can’t get it back so it’s impossible for Buster to fill it.  Buster will carve out his own place in my heart.  I think that’s why I was having so much trouble in the beginning. I kept waiting to feel for Buster what I felt for Casey.  Now I realize that won’t happen and it’s ok.  Buster is not Casey and it’s not fair of me to expect him to be.  Buster will be himself and he will carve his place in all our hearts all on his own.  He already has! 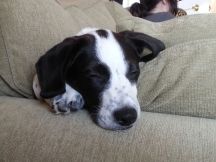 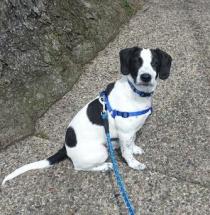 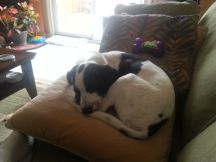